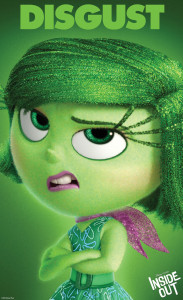 Riley is a teenager who has just moved from Minnesota to San Francisco, which causes her emotions to be all over the place. Literally.

I know Inside Out has been praised for its revolutionary depiction of emotions, to the point that many claim it could be a good tool to teach kids.
I usually don’t mind the necessary over-simplification of any concepts or ideas that come with animations. I love most Disney movies, and enjoy them to this day. However, despite Disney’s claim to have used research in the field of psychology, I am not impressed by this over-simplification of emotions. Instead of being revolutionary, it reinforces the misconception that being depressed is like being sad, because the emotions are categorized in such a way, that it does not allow for anything more complex to happen. Riley does not suffer from depression, she’s indeed just sad. But I can see why a lot of people would not be able (or rather would not want to) tell the difference.
Now I’m not saying that Inside Out is problematic to the point that kids should stay away from it. Not at all. To treat as a revolutionary movie is what I find should be avoided.

Finally, while they were some fun characters here and there, Riley and her love of hockey and Minnesota were not compelling enough to keep me interested.
1/5
Tags: movies (2015)
Subscribe